Chabako Tea at Allerton Park, Monticello, Illinois
On May 11, 2012 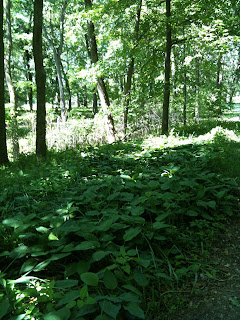 My sister and I went to Allerton Park to make chabako tea. It was perfect weather with little white clouds floating across a clear blue sky, birds singing, and grass so fresh and green that the whole scene seemed unreal. After living in Austin, I had forgotten how tall the trees are in central Illinois where the soil is deep and rich and there is plenty of water.

Back when I was in high school, there was a little spring hidden in a leafy a ravine that was off the main path between the mansion and the formal gardens.  One could wander down into the coolness and rinse hands in the little pool of water the size of a birdbath. I thought it would be nice to make tea there, but the site has been “upgraded” with a wooden footbridge that allows visitors to see but not disturb the tiny stream that trickles down to fill the pond that was created to reflect the  mansion.

We walked on up to the other side of the ravine to a small white trellis gazebo with a concrete bench. I brought out my travel chabako (see previous blog entry) and a thermos of hot water and made tea. 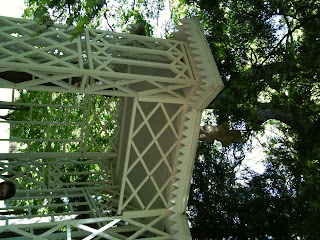 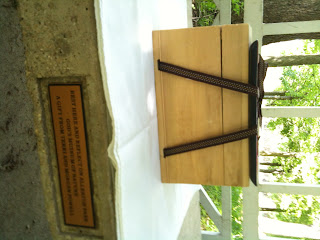 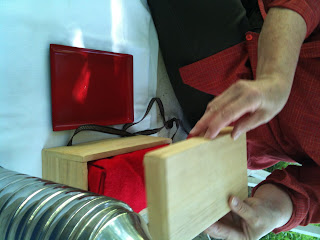 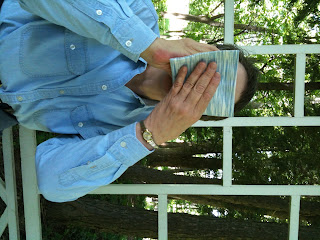 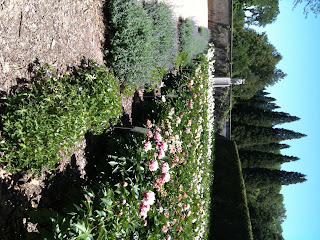 After tea we strolled down the central alley of the formal garden to enjoy a collection of peonies, hosta, and  formal clipped hedges.

Monticello is a small farm town that is also a county seat with well-educated lawyers and teachers from a nearby major university. There were farmers who were in tune with the seasons and townspeople who worked together to create an orderly and harmonious place to raise their families. 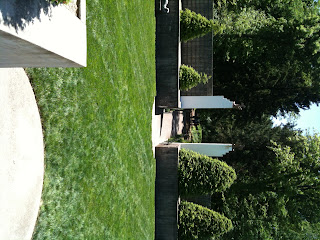 As a child I recall passing through stately white pillars that led into a wide swath of a path cut into the woods. My parents took my and my little sister there to enjoy the fall color of trees in crisp autumn air. Coming upon the classic bronze centaur sculpture at the end of the path made reading fairy-tales even more vivid.

I also recall the magical time when I was about 12 years old and we 4H campers tramped across the road to gather and sing by candlelight in the grassy area guarded by 2 rows of large blue glazed ceramic fu dogs on high pedestals.

Later, in high school, I won a scholarship to an art camp at the park. We slept in attic rooms of the mansion and spent our days in different areas of the garden sketching and painting the sculptures and landscape. It was much later that I realized just how very lucky I was to grow up in a small town of 3,500 people, and also experience a taste of European formal and informal gardens and sculpture, created by Robert Allerton amidst acres and acres of corn and bean fields.

Experiencing the contrast between formality and rusticity at an early age seems to continually resonate in my art work and approach to life in general. I find a similar sense of order, appreciation of and respect for tools and things made with them, and a deep connection with Nature in Chanoyu.