This week I didn't have time to think about chabako because I am helping my sensei with two events. On Monday she was teishu (host) and I was first guest for about 100 students at UT-San Antonio.

On Friday we will host 30 sixth graders from a private school here in Austin who are studying etiquette of various cultures.  For this event, Sensei will narrate and I will be teishu. I will use the kaigu I made, a set including a mizusashi, kensui, and futa-oki (water jar, waste bowl, and lid rest), and a natsume (tea container) with a striped koma pattern that is similar to a Japanese toy spinning top. 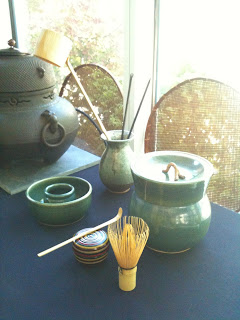 Each student will be served a sweet and tea in a bowl they will take home as a memento. Of course I made a few extra in case some didn't turn out too well. 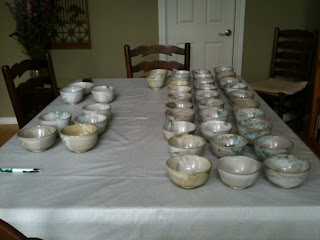 Posted by chabako at 7:26 AM No comments:

I found this Vogue Travel Coffee set at an antique mall last week. It seemed the perfect start for a "mid-century modern" theme chabako set. The 2nd photo is with a teabowl I made and a natsume (tea caddy) and whisk, to test for size.

The outside of the case needs polish and restitching, and I plan is to put a fresh new lining in it and make a teabowl, kensui, and sweets dish to fit.  The color of glaze I used on a coffee pot that was commission for an advertising piece would be perfect for this set.

Posted by chabako at 6:56 AM No comments: 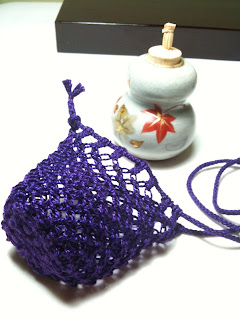 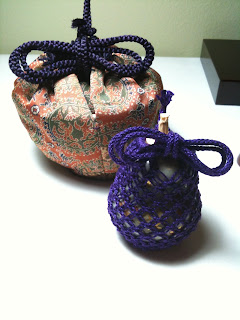 I've been busy with gardening and thinking about chabako. Here are pictures of a macrame bag I made to use in the chabako procedure called shikishi-date. I made it with Perle Cotton thread to practice before investing in silk thread. The bag is made with a simple macrame technique and I made the drawstring on my homemade kumihimo (braid) stand called maru dai.
Posted by chabako at 7:29 PM No comments:


April 9, 2012
This is the first entry in a blog about my interest in chabako, a special little box filled with most of the utensils used to make a bowl of matcha (green tea).

The craziness started in the mid 1980s when I saw a picture in a Japanese magazine of a lady kneeling on a tatami mat with a small rectangular lidded basket, precious little tea things and their drawstring bags carefully arranged in front of her. I was already studying chanoyu but at that time could not imagine that I would ever reach the level of using these intriguing things myself. Now I know that they are for a special procedure called shikishi date, named because the small brocade napkins are spread around like shikishi, poem cards.

After studying chanoyu for three years here in Austin, I’ve begun to learn the four chabako temae (procedures). I’ve become even fonder of the process: packing the smaller scale items necessary to make a bowl of tea and serve tiny sweets, bringing them out for the guest, and then putting them back into their little wooden box until the next opportunity.

First I searched for a lidded box of similar dimensions to practice the temae. It’s not an easy size to find in the US. Then in my pottery studio, I made a small chawan (teabowl), a furidashi (jar for tiny hard sugar candy) and a chakin-tsutsu (holder for small wet cloth to clean the chawan).

After two failed attempts to bid for a chabako set on eBay, I finally had a winning bid and have enjoyed using the traditional utensils that came with it.  In addition I ordered a second set of matching chakin tsu-tsu, chasen tsu-tsu and natsume with the striped koma pattern of a child’s toy top to use on certain occasions.

It was so much fun to think of different combinations of utensils to use in my chabako! I decided to create a Cowboy Chabako when I discovered a small glass boot that could be used as a chakin-tsu-tsu. When I told a good friend about my project, she found a great little blue enamelware coffee pot that is perfect as a tetsubin (hot water kettle).  I could use these things with my traditional chabako, but I intend to make a lidded box out of leather and add a few other touches to complete the theme. I'll post some photos later...

Now I’m thinking it would be fun to create even more chabako with special themes.  I think I must be chabako-crazy!